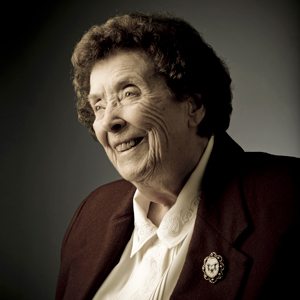 Founder
Born in the Netherlands Feb. 13, 1916, she survived the dangers and “hunger years” of World War II living in Southern Holland. She earned a degree in education in Holland and subsequently joined the Catholic Lay organization, The Secular Institute of Mary of the Annunciation. She later received a master’s degree in religious studies from Loyola University in Chicago. After leaving Holland she moved to Canada to help open a Catholic school, which got her closer to North Idaho. In 1984, she felt God calling her to move to North Idaho where she met her neighbor Maryellen who was the inspiration behind the volunteer clinic in 1985. Lidwina Dirne passed away in 2013 during the re-branding of Dirne Community Health Clinic. While she did not live long enough to see the launch of the new name, Heritage Health became even more fitting due to her influence on healthcare and our community. Lidwina Dirne left behind a wonderful heritage. Now it is our turn to provide you with excellent healthcare so that you can protect your heritage and those around you.

In January 1986, the volunteer clinic opened under the name Lake City Health and then changed its name to Dirne Community Health Centers, which was incorporated as an Idaho 501(c)(3) non-profit corporation. Heritage Health, originally named “Dirne Community Health Clinic” was largely conceived through the pioneering efforts of one individual, Lidwina Dirne. Upon personally witnessing the devastating impact that inaccessibility to healthcare had on a single mother with disabilities who could not afford basic medical care for herself or her family, Lidwina mobilized a community-based effort to find solutions. The result was the start-up of a volunteer-run, free clinic that received total community backing, and operated two evenings per week. For fifteen years the clinic was supported by local donations, in-kind contributions, pro-bono legal services, and was staffed by volunteer primary care providers. As the demand for services increased and exceeded the capacity of a part-time volunteer clinic, the need for expansion became a necessity.

In 2003, Dirne applied for and received federal funding from the Health and Resources Services Administration (HRSA) to become a federally qualified health center (FQHC). By February of 2004, the clinic opened its doors as a full-time community health center. During its first year, the health center provided services to 3,806 individuals. A wide range of services (medical, dental, behavioral health) have been added since the inception of the organization. In 2018, we served nearly 30,000 patients across North Idaho.